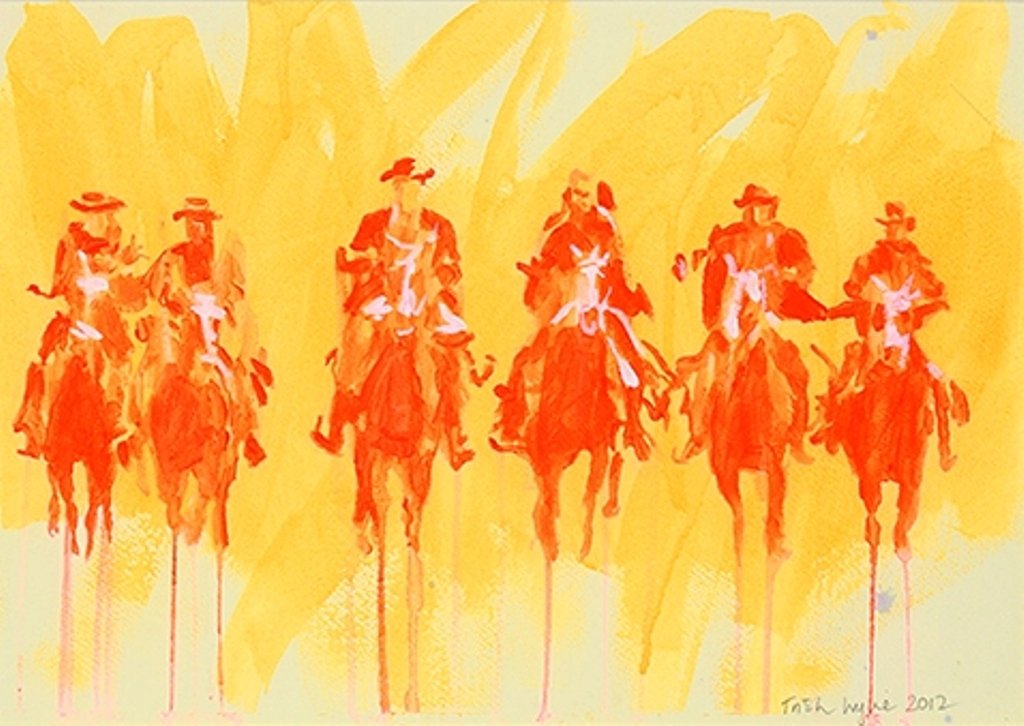 In a new series of Blog posts, Belgravia Gallery will be asking artists to answer some questions about their chosen career which we hope you will find interesting. Below is the first of these Q&A sessions with Trish Wylie, whose current exhibition of recent paintings is on show at the gallery.

Q:  WHAT INSPIRED YOUR INTEREST IN ART? WHEN DID YOU BECOME AN ARTIST?

A: I have always been drawn to the arts, performing arts, dance, music, literature but I chose painting for its immediacy and its solitary practice. I would say one of my earliest experiences of art was through books and watching television, and visiting the cinema – and the interiors of Catholic Churches.

When I was about three, I would draw in the margins of Encyclopaedia Britannica. I later moved on to bedroom walls with lipstick. I always loved making images and materials.

I attended Camberwell Art College as a mature student when I was 24 and since graduating have seen myself as an artist and always continued with my work and subsidised my income by lecturing at various colleges in the South West. I have always painted, but have made some other work including film and 3D work.

Another influence was watching my father work with leather from upholstering furniture to making shoes, skirts and bags, so seeing what someone can make from materials by using their hands.

Q:  WHAT IS YOUR PREFERRED MEDIUM AND WHY?

A: I love oil paint for its richness and feel, but in fact I am a bit of a material junkie – I also work with graphite, charcoal, pencils, ink, acrylics and watercolour. Also, the materials I work on are very important to me, such as the weight and smoothness of paper, and the smoothness and stability of the polymer canvas I often use.

As oil paint takes longer to dry it gives an artist room to make changes and keep a painting open and flexible and this is why I like to use oil. There are other faster-drying mediums, but with oil I am able to explore possibilities by taking paint away as well as adding it – something that acrylic paint won’t enable you to do as it dries so quickly.

A: I have lots of artists whose work I admire, but a consistent favourite is the painter Helen Frankenthaler, particularly the sea and mountain series. I love her delicate but confident handling of paint. She was very original in her handling of materials and had to hold her own amongst the macho, male American abstract expressionists.

To narrow down a favourite work of art is impossible for me – there is so much. Matisse’s Red Studio and Judith Slaying Holofernes by Artemisia Gentileschi, are two very different paintings, which I am always in awe of, paintings by two very different artists at different periods in history.

Q: WHERE DO YOU GET MOST OF THE INSPIRATION FOR YOUR WORK?

A: My inspiration comes from my love of films and the moving image. Music also is a motivator, and I often listen to music when I’m working. Sometimes the score from a film that I am working from inspires me. I often watch films with a painter’s eye, and am always conscious of where the camera is placed. This way, when I come to work from a film I find that I can get into it and exercise a degree of re-editing and see things as a painter that would not be seen as a viewer.

The film directors whose work I love include Sergio Leone, John Ford, Alfred Hitchcock and Akira Kurosawa. They were all very influenced by painting and looked at paintings to inspire the look of their films.

Q: IF YOU WEREN’T AN ARTIST, WHAT WOULD YOU BE?

A: I don’t know what I WOULD be, but what I would have been interested in becoming either a cinematographer or a psychologist.