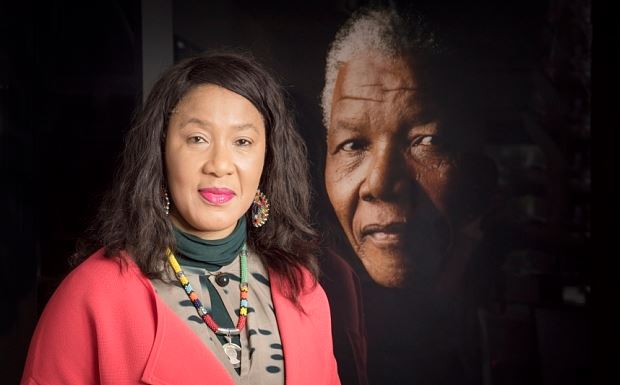 An excerpt from The Telegraph's article on Dr. Makaziwe Mandela and her legendary father, Nelson Mandela.

Dr. Makaziwe Mandela He was fondly known in his native South Africa as the father of the nation. But Nelson Mandela was a father in the literal sense too, bringing six children into a world he is famed for changing. While revered by an adoring public, however, relations with his eldest surviving daughter were not always easy.

Dr Maki Mandela, 61, is proud of the man known as Tata (a Xhosa word for father) but does not regard him through the rose-tinted spectacles others do. In Britain this autumn to promote the artwork he produced in his final years, she is candid about their relationship, admitting it was challenging at times. Their separation while he was in prison was in part to blame.

“I was very bitter I had a father who was not there – which was how I saw it through the eyes of a child – who chose politics over me or even my brothers, my family,” she says when we meet in a Cotswolds hotel.

It was a challenge few families must face, but only one of several this one had to navigate. Mandela’s personal life was fractured by tragedy and Maki is the only surviving child of his first marriage to Evelyn Mase: she was named after her elder sister who died aged just two; her oldest brother, Madiba, died in a car accident while Mandela was on Robben Island and her other brother, Makgatho, died with AIDS in 2005.