Jurgen Schadeberg reflects on his meetings with Nelson Mandela 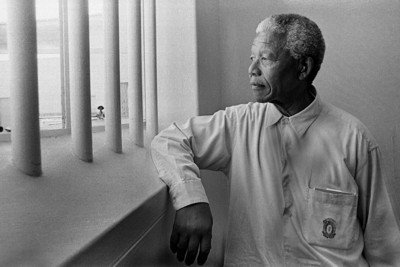 Jurgen Schadeberg reflects on his meetings with Nelson Mandela

Jurgen Schadeberg is well-known for his iconic images of Nelson Mandela from the 1950's up until the 2000's. In recognition of his recent Cornell Capa LifeTime Achievement Award given to him by the International Centre of Photography (ICP), we are delighted that the incredibly distinguished photographer has agreed to exhibit some of his photographs of Nelson Mandela at the gallery alongside original pastel drawings by Nelson Mandela. Jurgen will also be at the gallery for the Private Viewing on Monday 23rd June 2014 and will speak about his experiences of photographing Nelson Mandela from the 1950's through to after his release from prison.

Schadeberg took some of the most recognisable photographs of Nelson Mandela and his image of Mandela in 1994 on his return to Robben Island was voted one of the most memorable images of the twentieth century by the Photographers Gallery. Here he reflects on his memories of taking some of these photographs:

Mandela’s Return to his cell on Robben Island 1994

"We believe it was Mandela’s first official visit after his release from prison in 1990 and obviously an emotional visit when he returned to the 2 x 2.5 metre cell where he spent 18 years of his 27 year sentence. This was where he studied, did pushups and reflected on the goal of the liberation of his people. He looked out of the bars and when he thought I had finished taking pictures, relaxed somewhat, and turned around to smile. This assignment was done on an independent basis."

"The then Editor of Drum came rushing out of his office and requested a photographer to urgently rush to Pretoria…'something is going to happen….go yourself', he said to me… just as I arrived in front of the Synagogue, the doors burst open and the accused emerged,  lighting cigarettes. This took place on October 13th 1958 when Mr. Pirow, leader of the Crown team, withdrew the indictment against the accused. The Treason Trial had begun in 1956. A few months later 30 of the 91 people were put on trial again, which lasted till March 29th 1961 when they were all acquitted. In the picture Mandela emerges beaming from the court, to his left is Moses Kotane, an ANC leader at the time."

"I chartered a light fixed wing plane and photographed the funeral from the plane as I felt this was the best to show the magnitude of the event. This assignment was done on a freelance basis.

In March 1960 there was a countrywide campaign organized by the PAC, Pan African Congress, to defy the pass laws by publicly burning them in front of police stations. All African had to by law carry a Pass Book at all times which limited their movement and therefore employment. In a small town called Sharpeville the police fired on a fleeing crowd and 67

Civilians, including women and children. were shot in the back and 150 were wounded."

Nelson Mandela in his law office,

"This office Mandela shared with Oliver Tambo, in Chancellor House, opposite the Magistrates Court in Johannesburg. I went to photograph Mandela for Time Life with the writer Ted Hughes. Mandela was on his way out and had files under his arm and I asked if he could wait for a minute…he gave me 2 minutes and we talked on the way out. 1952."

"December 1951 at the ANC Conference in Bloemfontein. This was a key annual ANC meeting when the decision was made to go ahead with the Defiance Campaign on 6th April 1952. I and journalists Henry Nxumalo and (Sir) Anthony Sampson, interviewed and met Nelson Mandela for the first time . Mandela, an impressive and distinguished young lawyer, was the Youth Leader of the ANC and had just been voted as the Volunteer in Chief of the Defiance Campaign which was designed to defy and change the unjust Apartheid laws…and ad momentum to the struggle for freedom."

"Robben Island has become a symbol for the triumph of freedom over repression, a testament to the triumph of justice over injustice. But is became so only through the suffering and hardship of those incarcerated behind its slate grey walls. Nelson Mandela, who was sentenced to life imprisonment on Robben Island, spent 18 of his 27 years in a cell 2 x 2.5 metres on Robben Island prison. He was released from prison on 11th February 1990 and became the first black President of South Africa in 1994.

I and my wife Claudia also produced a 90 minute documentary and a book about the history of  Robben Island. During the course of the filming we had to stay overnight on Robben Island in the “guest house” and I remember that I and the crew had restless nights and many nightmares – we were experiencing the bad spirits and pain of this Island prison."

"In 1952 there was a printing press in downtown Johannesburg in Commissioner Street which was owned by a coloured man from Lesotho called Andy. They were printing ANC pamphlets and posters. The printing works used to be a bakery. From time to time the leaders of the ANC met to check on the printing such as Nelson Mandela and Walter Sisulu. I, together with Anthony Sampson, joined them occasionally for a drink, eating curried friend chicken from the nearby Indian restaurant in Fordsburg called Uncle Joe. As it was illegal for people of colour to drink or own alcohol the brandy and beer were hidden in the oven of the former bakers and we used a long baker’s shovel to fish out the liquor. There were some jolly evenings and once there was a joking discussion on who would be part of the cabinet when the ANC took over the government of South Africa…I was appointed Minister of Entertainment…at the time Mandela was the Youth Leader of the ANC. I, apart from Anthony, was the only white person there.A memorable event was when I and Claudia were invited to Madiba’s Soweto house for a New Year’s Eve Party in 1990 – his first as free man.

We arrived early and sat on the terrace with Madiba chatting about the fifties, the courgageous Drum writer with whom I worked ,Henry Nxumalo, about Sophiatown and some of the people of that period. We then went to the lounge which was now filled with a host of former Robben Island prisoners such as Walter Sisulu, Andrew Mlangeni, Bishop Tutu. Winnie made a very good buffet dinner and we happened to sit at a table opposite Madiba & Winnie and toasted in the New Year with them.

In 2004 Claudia and I were invited for lunch by Madiba at his home in Johannesburg. When we arrived he jokingly said that we wasn’t sure if we would turn up as he is old and retired and we were very busy people!

I gave him some books with my fifties images which he carefully leafed through commenting on those former friends and colleagues that had passed on. The three of us had a simple meal and Madiba chatted about world politics and a “young lady” who had brought him tea at a visit to the States – he meant Barbara Streisand.

During the filming of one my drama series called Drumbeats  in 1995, our pretty leading lady, who played the role of a photographer, posed at a real press conference with Madiba as a professional photographer while we filmed her. As Madiba walked into the hall he made a beeline for her and asked her if she had a good time at Christmas and if she got drunk.

In 2006 I had an exhibition of my 1952 Defiance Campaign images, when Mandela was the “Volunteer in Chief”, at the Mandela Foundation and Madiba opened the exhibition. He was very nostalgic about this crucial period in the struggle for freedom and carefully looked at each image, naming and reminiscing about many of the people in the images."