Peter Blake was born in Dartford, Kent in 1932 and studied initially at Gravesend Technical College from 1949-51. Following a period of national service in the Royal Air Force, Blake attended the Royal College of Art and graduated in 1956. Upon graduation he won the Leverhulme Research Award to study popular art, this allowed him to travel and study folk art in many countries within Europe.
Blake's fascination with all streams of popular culture, and the beauty to be found in everyday objects and surroundings is refelcted in his work. His creations are fresh and contemporary and many feature found printed materials such as photographs, comic strips or advertising texts, combined with bold geometric patterns and the use of primary colours. There is also a great sense of sentimentality and nostalgia which is found throughout his work particularly towards childhood innocence and reminiscence. Blake is renowned for his connection with the music industryand has produced iconic album covers for the Beatles, Paul Weller, The Who, and Oasis. Blake has also designed fabrics for Stella McCartney, and in 2012, re-designed the BRIT award statuettes and produced a portrait of the the Queen commissioned by the Radio Times to celebrate the Diamond Jubilee.
During the 1960s and 70s Blake taught at various institutions such as St. Martins School of Art, Harrow School of Art, Walthamstow School of Art and the Royal College of Art. He was elected a member of the Royal Academy of Arts in 1981, and a CBE in 1983. 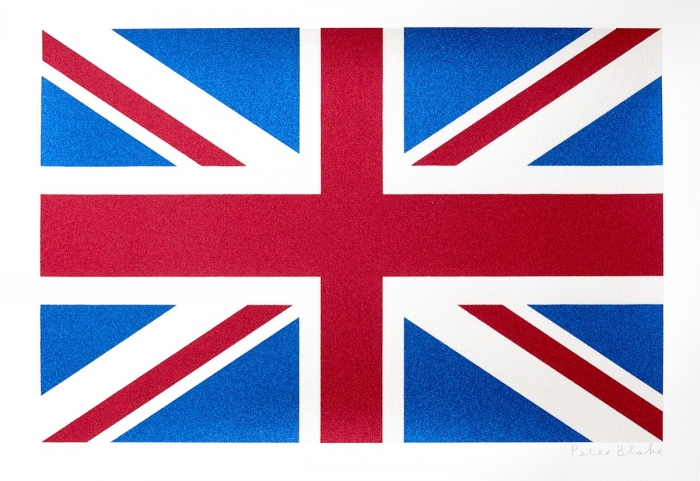