Sheffield born artist John Hoyland was one of Britain's leading abstract painters. He began his educational training in the arts at the age of 12, attending Sheffield School of Art & Crafts, then London's Royal Academy Schools over a 14 year period.

Hoyland's career took off during the 60's during which he had his first solo exhibition at Whitechapel Gallery in 1967. It was at this event that art critic Mel Gooding described Hoylands works as ‘a defining moment in the history of British abstract painting’ which ‘established him without question as one of the two or three best abstract painters of his generation anywhere in the world.’

Over a career spanning six decades, Hoyland lectured and taught in the arts, travelled, painted and exhibited widely. His talents saw him bestowed with many honours and awards. John frequently visited the United States which brought him into close contact with the New York art world.

... His career was decisively influenced in the late 1950s and 1960s by his experience of American Abstract Expressionism.John's work have been the subject of retrospectives at the Serpentine Gallery (1979-80), the Royal Academy of Arts, London (1999) and Tate St Ives (2006). As Andrew Lambirth writes: ‘His paintings are abstracts but they are not about absolutes. They are about contingencies and specifics: very particular emotions, thoughts and feelings dependent upon the act of looking.’ 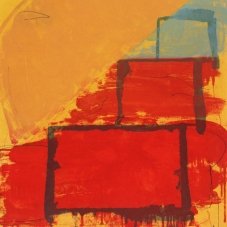