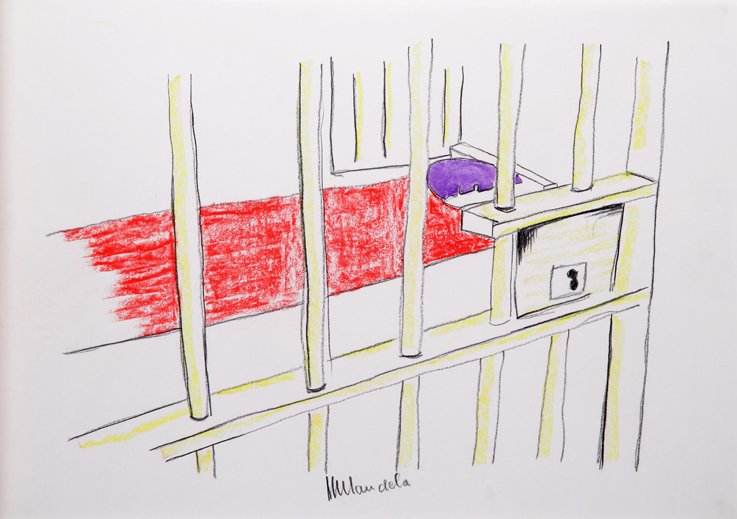 Drawings by Nelson Mandela of his prison cell in Robben Island and of the village where he was born and laid to rest will go on public display for the first time this week at an exhibition in London.

Nelson Mandela, Back in Qunu charcoal and pastel on cotton paper

Mandela produced the drawings, using charcoal and pastels, in the years after he stepped down as South Africa’s president.

“They are really charming drawings of places and objects that meant a great deal to him including the landscape around Qunu where he grew up and is now buried.”
Anna Hunter, Belgravia Gallery

The collection of original artworks remained hidden away over the course of a decade but will now go on sale. The value of the 24 works is not known but is reckoned to be “substantial” and will only be sold as a single lot to a buyer who will guarantee they will remain available for public view.

Mandela agreed to produce lithographs, which could be sold for charity, and Belgravia Gallery in London, which also represents Prince Charles was chosen in 2002 to market them. Mandela had begun sketching in his dining room at his home in Johannesburg in 2001.

The sale of the works follows his death at the age of 95 in 2013. Money raised from the sale will go to his family and to charity.

“These are the drawings of a man who has been through so much and yet is willing to return to the subject matter. This is his triumph over the adversity he experienced.”
Anna Hunter, Belgravia Gallery

“I think they are historically really interesting works of art,” said Anna Hunter, the gallery’s owner, who negotiated the deal to sell his art at a meeting with the former president at his home. “These are the drawings of a man who has been through so much and yet is willing to return to the subject matter. This is his triumph over the adversity he experienced.

“They are really charming drawings of places and objects that meant a great deal to him including the landscape around Qunu where he grew up and is now buried.

“He said to us that ‘when they finally let me retire I want to be a full time artist’. He might have been joking but he really enjoyed sitting at his dining table and drawing. It was a real escape for him just as it was for Winston Churchill and Prince Charles.”

Mandela is not well known for his drawings but they come with controversy attached. A limited series of lithographs produced by Mandela, in collaboration with an artist, depicting Robben Island and the cell where he spent many of his 27 years in prison during apartheid, were sold – many of them to international celebrities – with proceeds going to his charities for homeless children and Aids victims.

It has been claimed in the South African press that artwork purportedly by Mandela was being produced and sold with faked signatures. In 2005, according to South African press reports at the time, Mandela filed a lawsuit against a former lawyer for allegedly selling fake art works bearing his name.

Miss Hunter said the works being sold were genuine, had been fully authenticated and were backed by Mandela’s family. Mandela’s eldest surviving child, Makaziwe, was due to fly in to London on Saturday ahead of the exhibition’s official opening later this week.